Every fly fisherman has their favorite fly pattern they tend to gravitate towards, each one having a unique set of properties that could possibly turn the tables in the angler’s favor.  One of the most effective types of flies that anglers have success with day in and day out is the fly fishing streamer. Fishing with streamer flies for trout often equates to hooking up on bigger fish and trout streamers are notorious for luring some of the largest trout in any given habitat to take a chance on a meal. The following is a guide to some of the most revered and well known streamers that are frequently used by fly fisherman to catch trophy trout.

The Black Ghost is a classic streamer pattern that dates back to the early 20th century and remains popular among fly anglers to this very day. Characterized by a black body contrasting against a white feather tied in near the eye of the hook with yellow accents at the tail and head, this fly is perfect for attracting salmon, steelhead, and large trout. 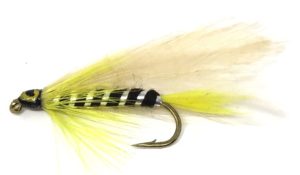 The Muddler Minnow is another classic streamer pattern that has been responsible for catching fish as well as anglers for many decades now. This pattern utilizes deer hair to form its bushy head and has a decent amount of flash thanks to the reflective gold tinsel that is tied in for the body. Even though the Muddler Minnow is a baitfish pattern, it fishes especially well in skinny water and riffles thanks to the high floatation that is achieved from the deer hair head. Also if fish are rising to large flies such as caddis, don’t be afraid to plop this bad boy out there. It will sit on the top of the water and entice trout all day.

When many fly anglers proudly advertise the first fly they have tied, a lot of times you won’t be surprised to hear that the fly tied was a Wooly Bugger. Not only does this fly serve as a great starting point in a fly tiers journey, but it’s also one of the most fishable streamer patterns that exist in an angler’s arsenal of flies. Tied in various natural colors, the Wooly Bugger easily mimics a small trout, bass, or even pike. It’s usually my preference to fish a Wooly Bugger that is weighted, but non weighted versions are great for shallow water and riffles. 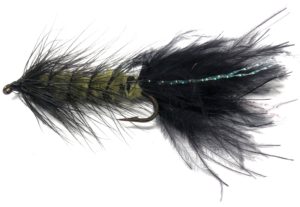 With a reflective silver body and strands of various colors of buck tail tied in at the head, the Little Brook Trout fly fishing streamer is undoubtedly a close relative of the well-known Mickey Finn. Fish it just like any other streamer for large salmon, steelhead, or trout and you are bound to be taken on a wild ride from some trophy sized game fish.

Quick tip: This fly is usually not weighted so if you want get it down into the depths of a deep pool be sure to add a bit of split shot onto your leader to achieve your desired sink rate. Sink tip fly lines and sinking leaders may also come in handy if you are fishing this fly in still water.

The Little Brown Trout is another streamer that makes good use of buck tail fibers to enhance the look of its body. This fly easily imitates a minnow, which is sure to entice even the most wary trout, bass, pike, salmon, or steelhead into taking a bite. Again this variety of streamer usually comes unweighted, so be sure to tote some type of split shot or counter-sink weights with you to ensure that you’re prepared to fish these delectable morsels in any situation. 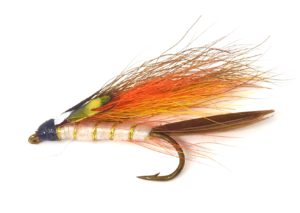 Much like the Little Brook Trout and Little Brown Trout, the Little Rainbow Trout’s main purpose is to mimic a baitfish, more specifically a small rainbow trout that will attract larger fish. These fly fishing streamers do well in sizes 6 – 12. Watch and be amazed as fish follow your fly with curiosity and excitement. 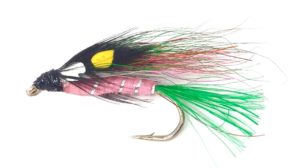 While most people think of a common fly fishing streamer as a type of fly that mimics a minnow or small baitfish, the Bunny Leech is a pattern that imitates just what you might think, a Leech. The strip of rabbit fur that is tied into this fly moves great in the water, giving this fly an illusion of life  that is sure to fire up bass, pike, and trout. Bunny leeches can be tied in many varieties of color combinations so don’t be afraid to have an assortment in your box. You never know what the flavor of the day will be.

Quick Tip: Fish this fly in stillwater through weed beds and lily pads in order to entice pike and bass!

When thinking of streamers to gear up with for fall and winter salmon/steelhead runs, the Popsicle Fly is sure to be a pattern of interest among most circles of avid anglers. The Popsicle Fly takes advantage of marabou feathers most commonly in the colors of purple, red, and orange, which appear extremely life like when submerged in the water due to their plumage. Popsicle Fly’s are great for luring the biggest and baddest salmon and steelhead to eat on even the hardest days of fishing. I would even venture to say that a Popsicle Fly could dupe a large resident trout to eat it too if presented in an enticing way, which is not such a terribly difficult task due to the life like action this fly gets in the water.

All of the fly fishing streamers mentioned in this article are tried and tested patterns that any angler would be smart to have as part of their fly fishing gear. Trout streamers are some of the most productive patterns that an angler can possess and I would highly recommend anglers of any skill level to try out any of the patterns mentioned above and witness their uncanny ability to lure trout and bring them to hand.

Comments will be approved before showing up. Once I began my fly fishing journey and I needed a similar “go-to” fly, I quickly learned that the Wooly bugger fly is much like the minnows I used in the past.  Very reliable, easy to fish, and many species of freshwater fish gobble them up. Once the cold weather of fall and winter start to set in, the majority of anglers choose to put their fly fishing gear in storage and wait until spring to dust it off to hit the rivers again The Top 6 Saltwater Flies To Use For Fly Fishing

There are hundreds of saltwater flies and many look strange and have crazy names. They come in all shapes, sizes, and colors. When I first started saltwater fly fishing (before I could read a blog post), I had to randomly buy some flies and try them out.